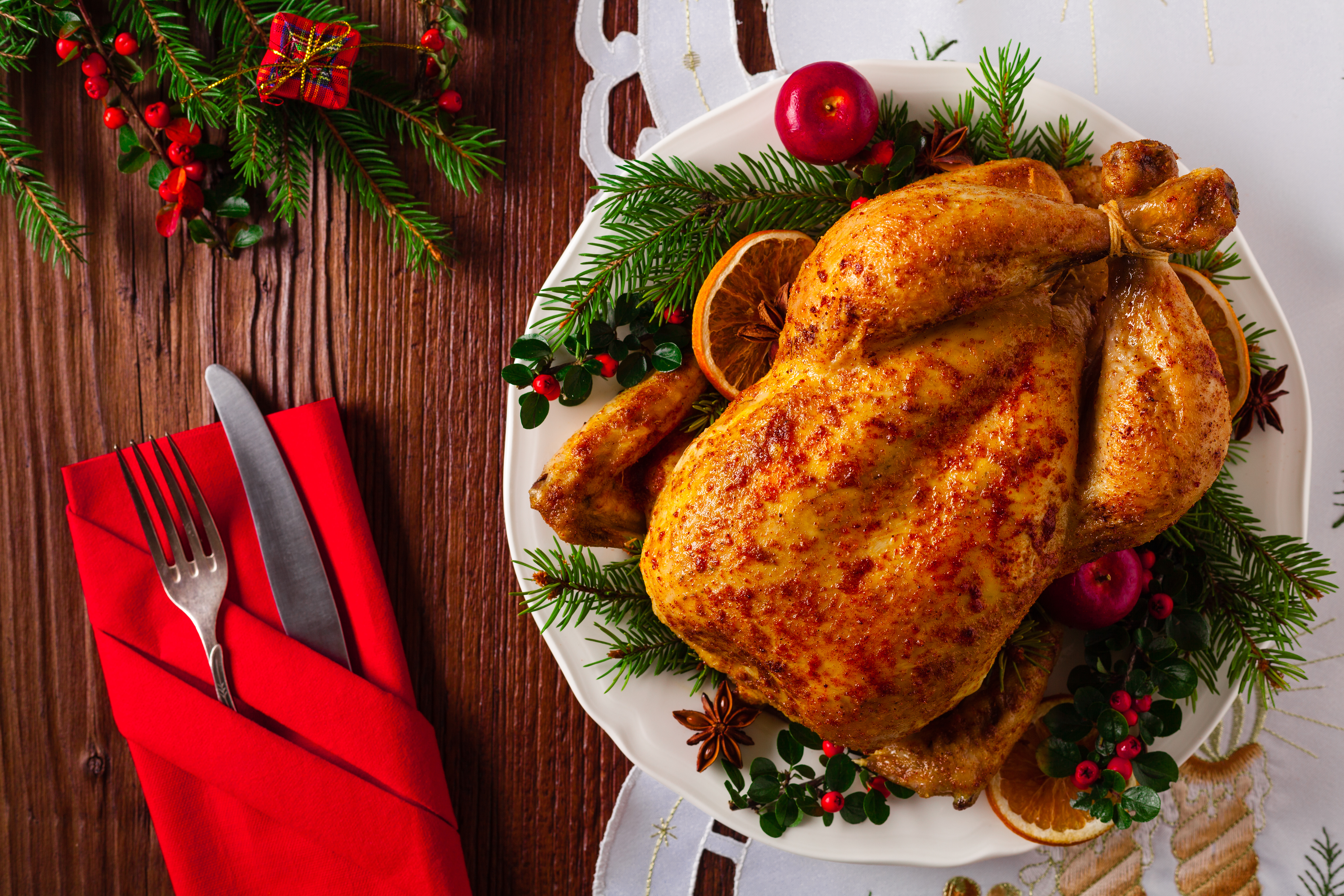 We had a mini Christmas lunch of sorts, on the day before Christmas Eve. And because we were in a celebratory mood we didn’t skimp on trimmings. We piled them high: pigs in blankets, bread sauce, sage and onion stuffing, roast potatoes and parsnips, glazed carrots, broccoli, and of course the gravy. Proper gravy, not a granule in sight.

I didn’t do much to the chicken before cooking it, just rubbed it with olive oil salt and pepper. Then I roasted it with thyme, bay, onion, and a lemon.

With all of these flavours going on – the roasted notes from the chicken most of all – I wanted something to go with it that could hold its own without drowning out the more delicate nature of the white breast meat.

I chose Ayinger Celebrator for its bold flavours married to a lighter character than you’ll find in other similarly dark beers. I drank it only lightly chilled, to around the upper end of what counts as cellar temperature.

Celebrator’s dark, roasted malts found an immediate affinity with the roasted flavours of the chicken, potatoes, and parsnips. Wine can’t do this; it has never come close to the Maillard reaction.

The beer matched the food so well that sometimes it was hard to tell where one ended and the other began. Back and forth it went, back and forth. The beer echoed the umami of the gravy. The gravy also had a fruity character, having been made white wine and redcurrant jelly, that brought out raisin and red fruit notes in the beer. Back and forth.

At times I found slight spice on the beer’s finish, and the hop bitterness, not usually pronounced, came through just enough to cut across the sweetness from the glazed carrots. These were undercut with a gentle warm earthy note from the coriander seeds in their glaze, which echoed the spice from the beer’s finish.

Just when it felt like it might all get a bit much, along came the beer’s final touch: its carbonation clearing my palate. The bubbles literally scrubbing my tongue and clearing the way for the next mouthful.

Perhaps not surprisingly, neither the beer nor the chicken stayed around long enough for me to take a picture of them, so I’ve had to resort to using a stock photo for this post!

Other pairings for Ayinger Celebrator

Doppelbocks such as Ayinger Celebrator will always works well with pork, particularly roast or barbecued. Ham is another good bet. Even bacon and eggs should be good.

With the fruit notes in there you could look to game as a pairing such as venison, boar, or quail. The fattiness in these meats would allow the sweetness of the beer to emerge without the whole thing becoming too heavy.

Tomato sauce based dishes should also chime well with the malt character of these beers.

And don’t forget the option of using the beer in the recipe too. Use it to braise meat, or as part of a sauce or gravy.

The malts can give chocolate notes too. For successful pairings here you should probably aim more towards lighter, milk chocolate rather than anything too dark and bitter.

Creamy or caramel notes in desserts should also pair up well if joined with Celebrator.

What have you tried with Ayinger Celebrator?

Perhaps you’ve tried one of the suggestions I’ve listed above. If so I’d love to know what you thought of it.

Or maybe you’ve tried it with something I didn’t mention here. Let me know about it in the comments. What food did you try with it, and how well did it work with the beer?